Windsor School occupies the same grounds and buildings as the former Queen’s School but the site has been extensively upgraded and expanded.

The Options for Change (1991-1995) program resulted in a reduction of Service personnel in British Forces Germany from 66,000 to 29,000 resulting in a reduction of the pupil population to approximately 10,000 of whom 80% were attending Primary schools.

In January 1993, after lengthy consultation, ‘Schools for the Future 2’ was published, making a provision for only four Secondary schools to satisfy the educational requirements of British Forces Germany (BFG). These schools were named as Gloucester School, King’s School, Prince Rupert School and Windsor School. The closure of the remaining Secondary schools in Berlin, Dortmund and Munster resulted in significant changes in staffing levels in those schools that were to remian open.

At its height Windsor School catered for over 1,100 students from military and Ministry of Defence (MOD) civilian personnel. However, due to further reductions in the strength of the British Army of the Rhine and related military drawdowns since, Windsor School now caters for an average of 550 students.

These students are a mixture of day pupils from the NATO Joint Head Quarters (JHQ) garrison, pupils brought in from nearby MOD garrisons and weekly / term boarders from AFNORTH, SHAPE, Ramstein plus a number of Isolated Detachments (ISODETS) being accommodated in the boarding houses. There were initially three boarding houses, Windsor, School and Chatham. Due to a further decline in the number of pupils attending the school Chatham House closed its doors to boarders in July 2006 and the building was handed back to RSU in 2007.

In 1992 West Block was completed, adding two floors of classrooms and a Sixth Form Centre to the school. As a result of the completion of these new facilities the Kent School site at Hostert was closed and handed back to the German authorities in 1993. The new building was opened by HRH The Duchess of Gloucester, Colonel-in- Chief RAMC on 25’th March 1992.

HRH The Princess Royal included a visit to Windsor School on 19’th September 2006 as part of her JHQ programme. Whilst in the school she watched a group of sixth form students, under the direction of Head of Drama John Grant, perform a thought provoking play based on the impact of deployment on families and met representatives of the Afghan Appeal.

Chatham House, one of three boarding houses, was closed early in 2007 and, as a result, School House catered for the juniors (Years 7, 8 and 9) and Windsor House for the seniors (Years 10, 11 and the Sixth Form).

In May 2008 Windsor School achieved a Silver Artsmark Award in recognition of the provision and opportunities available throughout the arts at the school. As a result of this increased focus on the arts a number of students were introduced to the Arts Awards Scheme. It developed rapidly in school with many successes, including one teacher who received SCE’s first Gold Award. 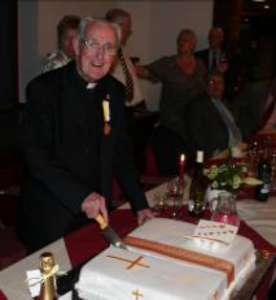 In November 2008 Father Bill Boyd, Padre to Queen’s and Windsor School for 36 years, retired at the age of 91. After celebrating his 90’th birthday in JHQ with colleagues and friends from over the years, he started to think about retirement.

His bishop finally persuaded him to take up an offer of a place at his Order’s retirement home back in the UK. Father Bill was a great supporter and friend of the school for many years. He always knew when someone needed a quiet word, a little time or words of advice.

Windsor School achieved the Healthy Schools Award and the Green Flag Eco Award in July 2009. Staff and students were involved in both awards. The healthy dimension of the school was praised in the assessors report for the way in which health is very much part of the ethos of the school.