In November 1952 work started on the building of the NATO Joint Head Quarters (JHQ) on open land consisting of some forest and a great deal of boggy, swampy areas within the Rheindahlener Wald and in October 1954 was ready for occupation, despite the coldest winter for 50 years. The following year Queen’s School, Rheindahlen, opened to provide day Secondary school facilities for the children living in the new NATO Headquarters and the adjacent British Garrisons and RAF Stations in the lower Rhineland.

The caretaker was Mr Johnson, the Clerical Officer was G Wilson and the Senior Mistress was Pauline Webber. Also joining the staff were Audrey Williams, Padre Sellars, Iris Lancashire and Brian Sullivan.

One of the first pupils of the school, Peter Williams, recorded his memories of JHQ and Queens’ early days as follows:

Schools were part of the early development plans but the building programmes were subject to delays. On the 10’th January 1955, 50 secondary pupils assembled in the Army Education Centre and were taught there for a term. At Easter 1955, a Primary school, St George’s, then without pupils, became home to Queen’s School and in September 1955, 283 secondary pupils finally moved into the purpose built school.

The school site consisted of what is now call South Block, the Gymnasium and the Old Hall and was only for Years 9-12. The current bowling alley catered for Years 7 and 8. The Scout Hut was the Art and Commerce block and the (now) Ladybird Nursery behind the Fire Station was the Crafts block.

Pupils were organised into four houses, Cornwall, Edinburgh, Kent and Gloucester. The house system remained in place for almost twenty five years when it was replaced with by a tutor system in order to promote greater involvement in competitive activities. 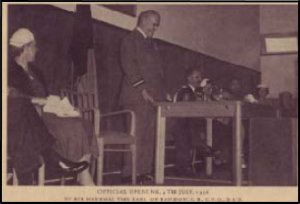 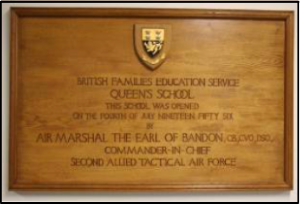 Almost a year later, after the official opening on 4t’h July 1956 by Air Marshall, The Earl of Bandon, CB, CVO, DSO, Commander-in-Chief Second Allied Tactical Air Force, there were 420 pupils and temporary accommodation was needed. The Education Centre, a canteen, St David’s School, the Church Centre, the RAF Amenities Centre, The Royal Signals Block, RAF trailers, the Scout Hut and the Youth Hut were all used at some stage. The board commemorating the opening ceremony can still be seen in Windsor School.

The founding headteacher, Mr George Wright,
opened the school in January 1955 and then again on the
new Queens site in September 1955.
His first entry in the school log reads as follows:

His comment recorded in the log book on the second day of the term clarifies his concerns with the catering arrangements.

Mr George Wright died on 21’st December of the same year, 1955, as he returned home to the UK on his first leave since taking office.

The Queen’s School song, written by the Music master, David Purvis, was printed in the first edition of the Queen’s Courier.

This School, this branch of Britain’s youth,
Set deep in foreign soil,
Must bear aloft the right and truth Gained by our forbears’ toil.
Four Houses here within one School Unite with common aim
That our example, work and play Achieve a worthy name.
Atlantic breakers smash in vain On Cornwall’s rugged shire:
Her people, fearless, brave the seas
In storm, in peace, in war.
Of Edinburgh’s fortress rock
No conqueror can boast:
Its every strength has won respect
And peace from coast to coast.
Now Gloucester’s towers serene and proud
Beside the Severn stand,
A symbol of our ancient faith,
The spirit of our land:
Invaders fear, whilst travellers greet,
The chalk-white cliffs of Kent,
And from her orchards, thick with bloom,
Our nation draws content.
Such scenes, beliefs, from ages past,
We hold to, all our days.
For youth to-day, to-morrow leads,
And guides our country’s ways.
So strive we must, and knowledge gain,
That war shall one day cease,
For through our work the future’s built,
And, through our learning, peace:
“Pax a Discendo”.
Words and Music by David Purvis LRAM, Music master, Queens School (appointed September 1955)

The Queen’s Courier was published for many years and documented the life and times of the school throughout the 1950’s, 1960’s and 1970’s. Reports of school visits, sports matches, house reports, academic achievement, speech day, notes of staff and student work all featured as the publication rapidly became part of Queen’s School tradition. It contained many photographs that give us an insight into the school in it’s earlier years. 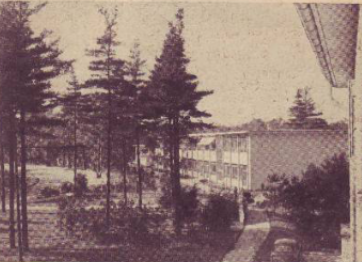 The photograph above shows the southern aspect of the school in 1956 shortly after its opening.

The photograph above shows the physics laboratory in 1956. 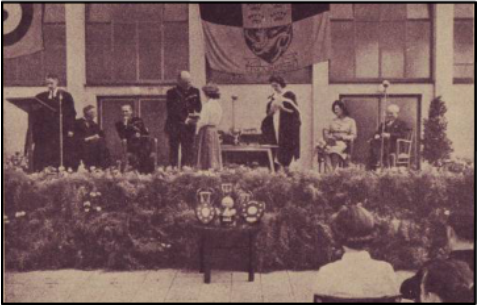 The photograph above shows the Speech Day and Presentation of Prizes in 1957.
From the very start it quickly became clear that the planned capacity of 400 pupils would be difficult to accommodate and by September 1956, with the roll having reached 414 pupils, plans were put in place to convert a number of cloakrooms into classrooms and to build a new Rural Science Block.

The rapid expansion of JHQ soon created a demand that was 50% in excess of Queens’ capacity. To manage the shortfall admission was restricted to the children of families living within the JHQ complex.

Children brought in from families outside JHQ were forced to board and it was was clear that greater provision was required.

When the three RAF Air Bases were built at Bruggen, Wildenrath and Laarbruch there was a need for another secondary school in the area to accommodate the extra numbers. At the same time pupils from SHAPE and a variety of ISODETS required boarding provision. The site chosen was an old Franciscan Monastery at Hostert, just north west of Hardt village.

The site had been converted into an emergency military hospital in the early 1960’s for use in the event of war.

The building was again converted, this time into a school and became Kent School in 1964 with boarders based at Chatham House and Deal House on JHQ, along with boarding at Medway House, close by Kent School.

Medway catered for weekly boarders with the other two housing the termly boarders. Stories of ghosts in the old Medway building still exist. 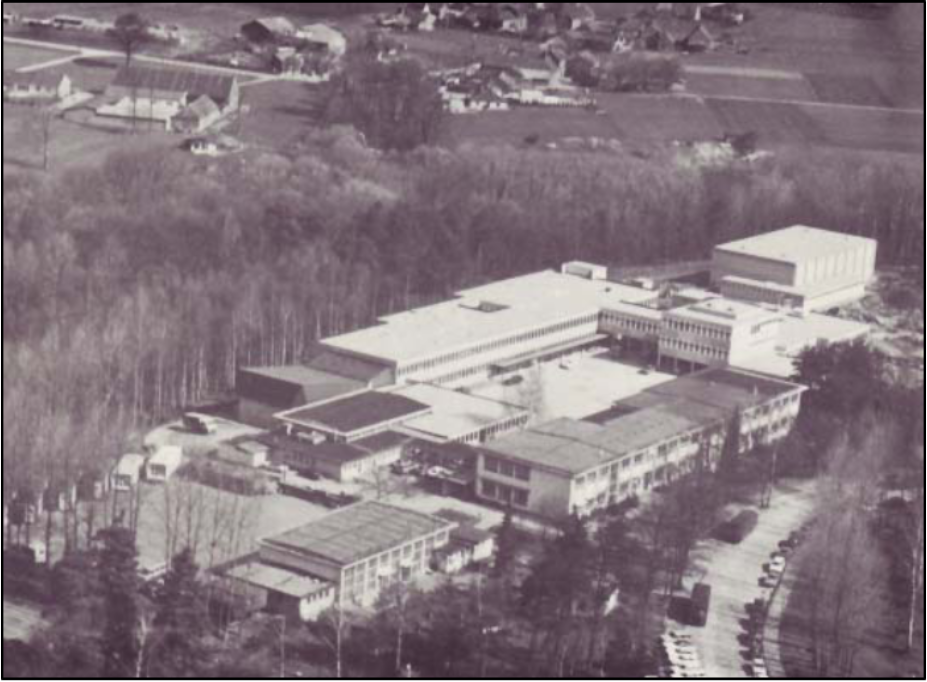 The photograph below shows the site on completion of the new buildings opened in 1979.
As the 25’th anniversary approached the headteacher, Mr Jim Lovegrove, wrote in his introduction in the Queen’s Courier:

In March 1987 the IRA planted and detonated a bomb close to the Officers’ Mess on JHQ. A number of windows in Chatham House were blown out as a result of the blast but due to the heavy curtains being closed at the time no-one was injured.

In November 1987 Queens School achieved a Schools Curriculum Award in recognition of their contribution to the theme of the School at the Heart of the Community.