Thanks to Juergen & Colin of www.kent-school.co.uk 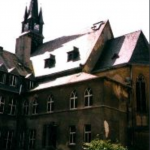 Just what was the history of the site we know and love so well? I’ve rescued a whole lot of stuff off of a German website (which has since disappeared), and attempted to translate the stuff.

Here is all we know to date – but please send any further details or corrections that you may have!

In summary it seems the Kent School site at Hostert was originally established by monks in the 14th Century. It is unclear quite when the first buildings were erected. The Order of the Franciscans of the Holy Cross from Waldbreitbach/Wied arrived in 1909 and started their ministry in Waldniel Hostert. Their activity ended 1937 due to the outbreak of the Second World War.

Following donations from a local resident family the Order came to Hostert and in only two years managed to build the “St. Josefsheim Waldniel” – the church we see there today. The church, administration building, a school and two further blocks were finished on the site by 1913. 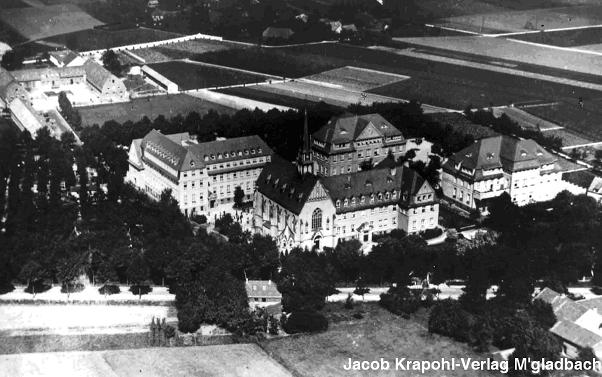 Aerial photograph of the four blocks and church with property yard around 1930. 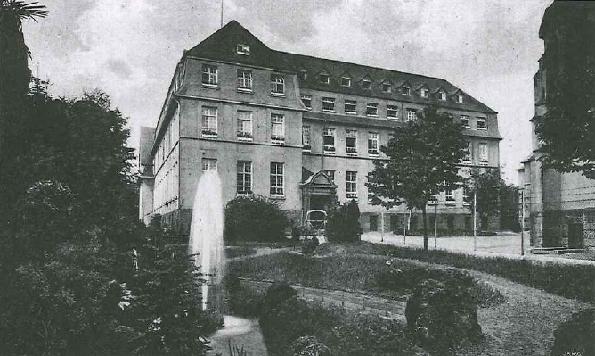 A wild picture from the side – how about that flash fountain hey??

The Franciscans looked after over 600 male patients, mostly mentally challenged, those with learning disabilities and physically disabled. The inhabitants worked, according to their abilities, on the farm and in the numerous workshops. This was clearly a commercial success as St. Josefsheim became self-sufficient. The centre also had a choir, band and theatre group which resulted in it becoming a highly esteemed cultural centre in the municipality. 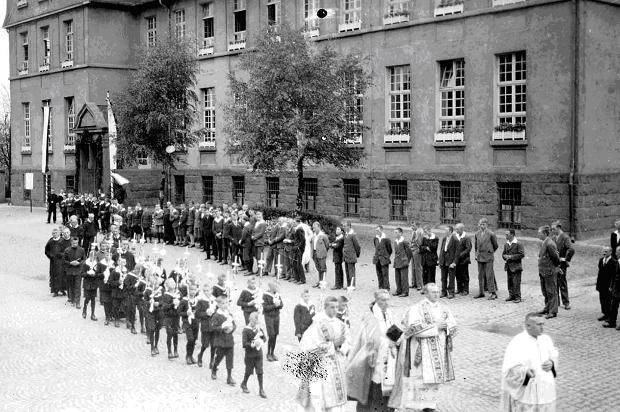 The National Socialists (Nazis) moved to systematically weaken the role of the Catholic Church throughout Germany. They achieved this by introducing an avalanche of rules and regulations from 1935 to 1937. As a result the Order had to pay high fines because of “violations” of foreign exchange regulations. Then several monks in the “Koblenzer brotherhood” were condemned because of alleged indecent assaults. Also the State refused to help finance the running of Waldniel Hostert and as a consequence the Order had to declare bankruptcy. The last of the brothers left the house on 23rd May 1937. 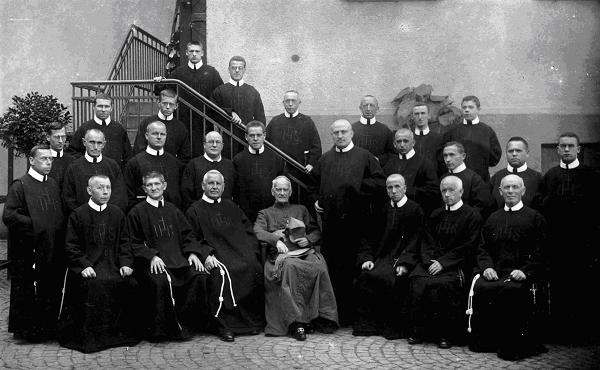 The Rhine province, today the Rhine Federation Republic, were owners of the institute from 1937 to 1952, and led it as branch of the Provincial welfare and institute for care Suechteln Johannistal [help?].

In 1937 the Rhine province acquired Waldniel Hostert for 600,000 Reichmarks from the bankrupt Franciscan estate. According to the original sales contract the fire insurance sum amounted to 1.75 million Reichmarks. The new owner built a house in Eschenrath for the commercial manager and nine single family homes at the Waldnieler heath for the maintenance personnel, who had to work on the estate. 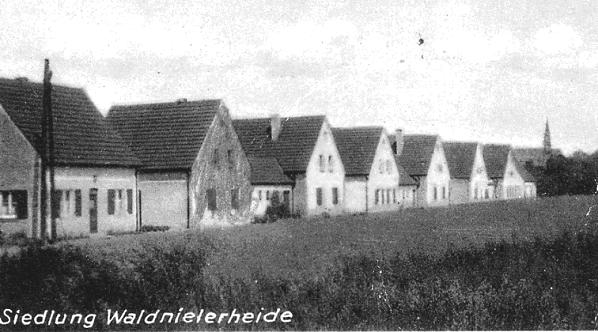 The National Socialists set about their New Order which questioned certain groups of people’s right to life. First “only” the mentally challenged were sterilised, then by the outbreak of the war Berlin brought their “euthanasia program” into effect, which resulted in the death of over 200,000 people.

In order to hide any trace of this process, people selected by the medical profession were shifted first to distant institutes, where they were then murdered (e.g. in Hadamar, Limburg or in occupied Poland and Chechnya).

For the Institute, now renamed the “Waldniel Institution”, at least 30 children were murdered through the National Socialist euthanasia programme. In total, more than 500 “patients” died. Another 1,044 people were transported to other institutions where many of them died. These were the site’s darkest days.

By 1939 the Nazis imposed an obligation on authorities to Register/Sign In all disabled new-born children, which were then subsequently siezed. From 1940 these new-born babies, along with older disabled children, were moved into newly formed “child specialist divisions”.

In Waldniel Hostert a “protection house” was setup for this purpose using one of the former Franciscan buildings, converted by the 1 October 1942. Doctor Wesse was employed as the leading doctor for these children. At least thirty disabled children were subsequently killed by two nurses under Dr Wesse’s charge. In July 1943 the “child specialist division” in Waldniel Hostert was dissolved and the remaining 183 children were moved to other specialist divisions. 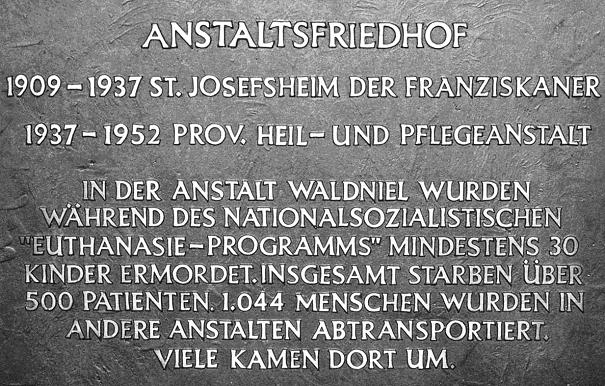 By the end of the 19th Century many new churches were built by the Catholics in Niederrhein. The inhabitants of Kirspel Waldniel – a nearby village to the Kent School buildings – established their place of worship at the site of the Kent School chapel.

The Chapel of the St. Josefsheims

The Schwalmtaldom collected monies from the residents of Kirspel to establish a new Catholic church. However, the protestant minister of Waldniel his bishop rejected these monies categorically. The residents of Kirspel found a way round this. The collected money (along with a generous donation from brothers and sisters Wix, Hostert), went to build a church that folk in the area could visit on condition that there was a regular holy fair organised by the Franciscans. This church, the Chapel of the St. Josefsheims, was inaugurated 1912. 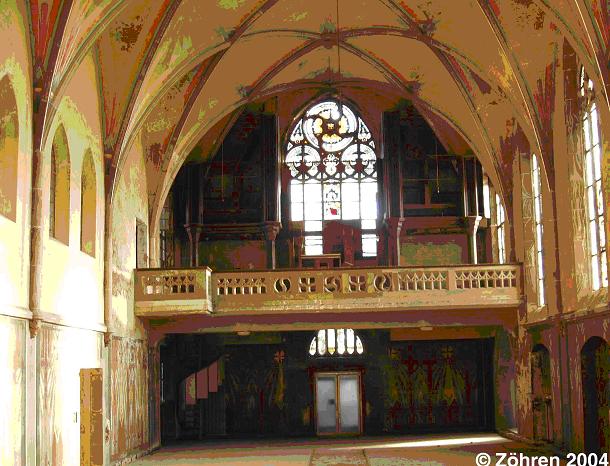 Altar choir of the empty church, 2004

The Franciscans started painting the chapel at the beginning of the thirties in accordance with the tastes of the time. Franz Xaver Haak from Erkelenz carved the reliefs of the main altar, which was completed in 1932. 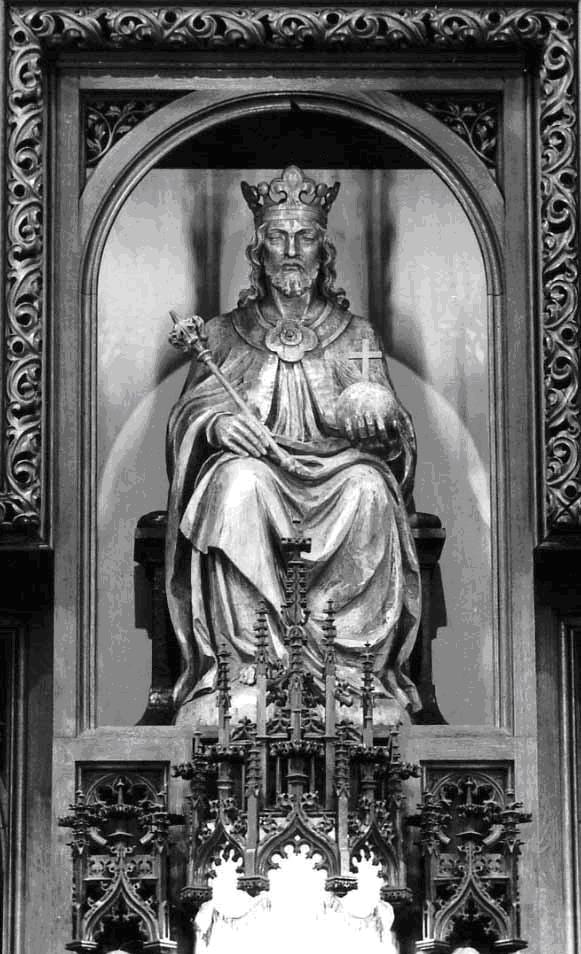 Christ king from the high altar of 1932

Surprisingly, the residents of the surrounding area continued to gather for services during the Nazi period. There was a kirchenchor with 23 members under rector guard village. After the Second World War the parish became established as the first Rectorate in 1947. 1978 a new church was built by the church authorities as Pfarrvikarie [help?] in Waldnieler Heath. Ever since then the former Franciscan chapel has stood empty. 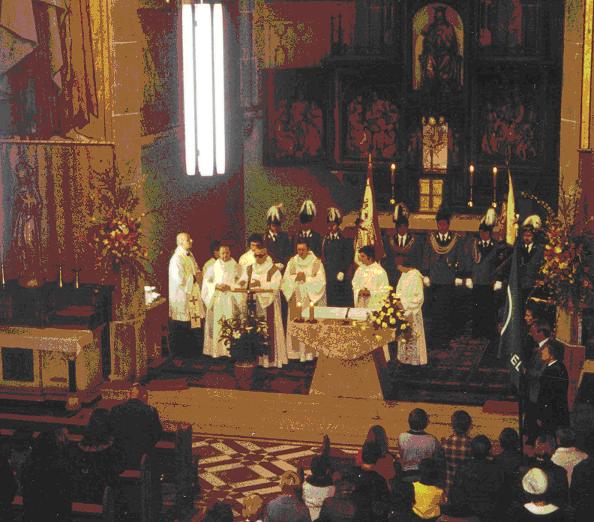 Office for high in the Hostert church, around 1975

In 1952 the expropriation of all properties of the Franciscan Order by the Nazis was cancelled. Although the brotherhood could now redeem Hostert (at an appropriate price) the feeling was they would not be able to lead the St. Josefsheim community as before, so they sold the buildings to the newly-formed German federation.

In 1952 the Allies rented the institute in Waldniel Hostert, initially for use as a military hospital. 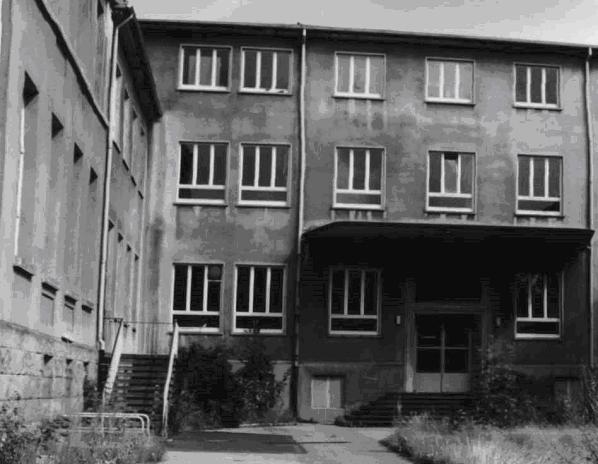 Main entrance of the British hospital and school

In the nearby Hardter Forest the Allies were setting up what was to become JHQ and since more military bases were being established a British hospital became necessary. Before the British moved into the buildings in Hostert, there needed to be some conversions made. The two original blocks of 1913 were connected with modern corridors. A modern clinic with two surgical, paediatrician and psychiatric departments were then developed.

It is fascinating that some ex-Kentie pupils actually arrived in this world in the maternity ward of the very buildings they would later attend school at!

In 1963 Queens School was bursting at the seams and it was clear another school was required in the area. Wegberg was established to offer better hospital facilities so the Hostert site converted into a school.

The redevelopment work included a gymnasium and swimming pool. To the right of the original buildings a cemetery and a large bus park were built, and on the left homes for British soldier families were built in 1967. During the redevelopment work human bones were discovered – remains of the patients who died at the institute between 1939 and 1945.

At the height of it’s time as a school it had around 6,000 pupils attending. Interestingly, the school got nicknamed “Colditz”, not due to it’s wartime past but to it’s gothic looking buildings sited high on a hill – so that could be clearly seen as you arrived on those lovely military tin can buses!

Due to the general reduction of the Allies military engagement in Germany, Waldniel Hostert was no longer required and so the authorities offered the real estate for purchase. Schwalmtal made two of the buildings that were part of the original complex listed buildings and so protected from being demolished. There have been many proposals, including a catering company using the former church and the following administrative block. The latest thinking is a hotel.

In 2000 the site was purchased by an investor from Duesseldorf. We wait to see what happens. 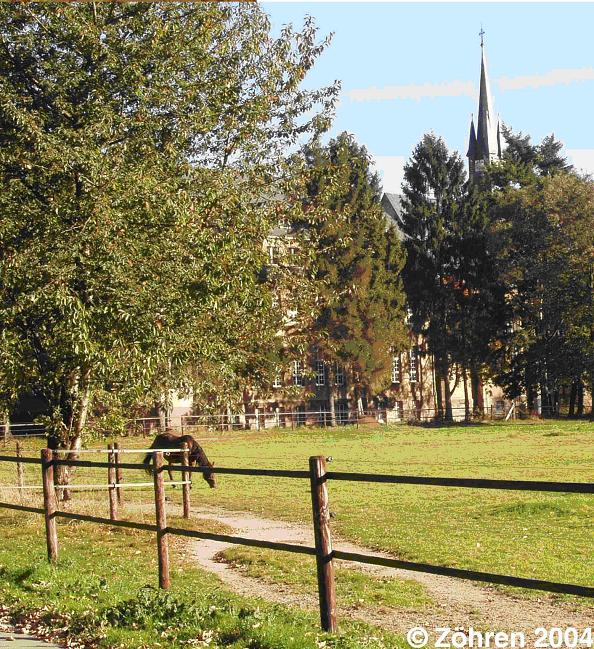 In front of the gate of the Memorial Garden, 2004

The former institute cemetery was inaugurated 1988 as a Memorial Garden for the victims of the National Socialist “euthanasia program”. It is known that within the institute’s cemetery many hundred patients were buried. Under the Fraciscans until 1935 the annual death rate was an average of 12. Between 1939 and 1943 a total of 512 people died including 128 children from the “specialist division”. 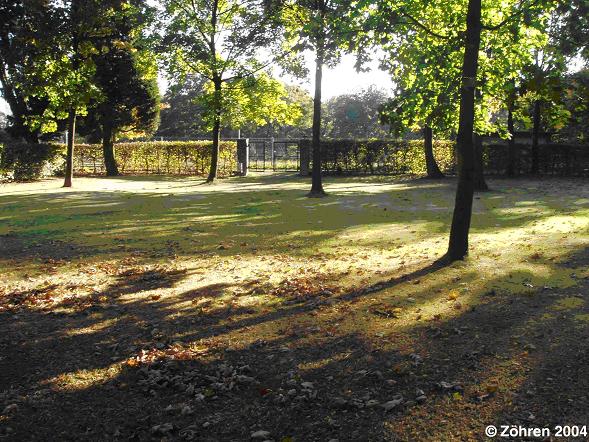 The Pfarre St. Mariae Ascension Day used the institute chapel as church. Therefore it was understandable that once acquired in 1958, the cemetery was no longer properly maintained. In 1962 monies were collected which was used to erect a memorial cross. In 1981 it was shifted from the church to the Waldnieler Heath. 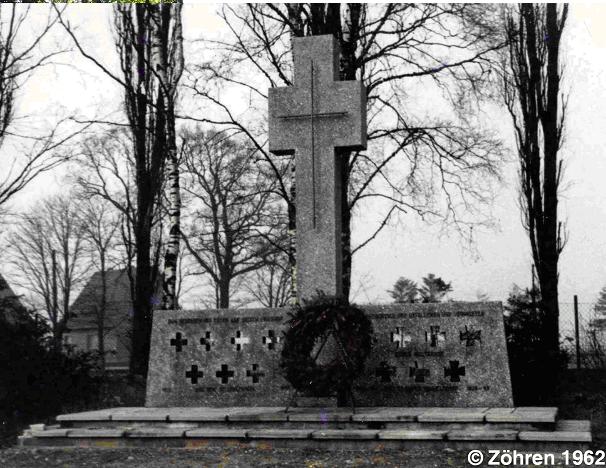 In 1987 it was decided the Schwalmtal authorities, following lobbying by the local citizens, established the cemetery as a permanent memorial site for the victims of the Nazi “euthanasia programme”. On the 26th November 1988 it was handed over to the public. 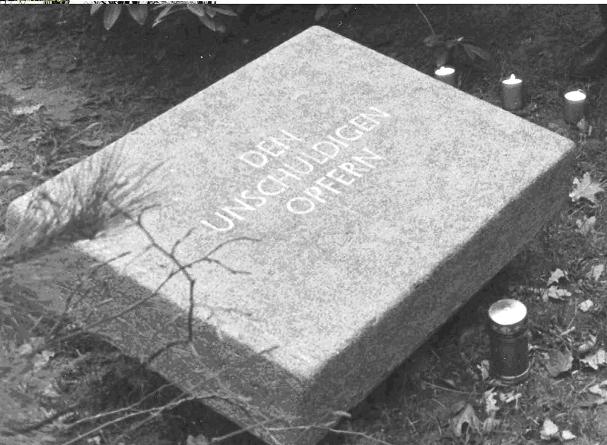 Cushion stone with the inscription “The innocent victims”

In 1987 the memorial site was “adopted” by a local High School. In 1996 the Federal President declared that the day prisoners were released from Auschwitz should be marked as an anniversary. On 27 January 1996 the local High School pupils and teachers decided that they would mark this anniversary at the Hostert memorial site, remembering the victims of the National Socialist despotism, in particular those of the “euthanasia program”.

The picture below shows the pupils of the 8b in 1987 taking part in clearing and preparing the memorial site. 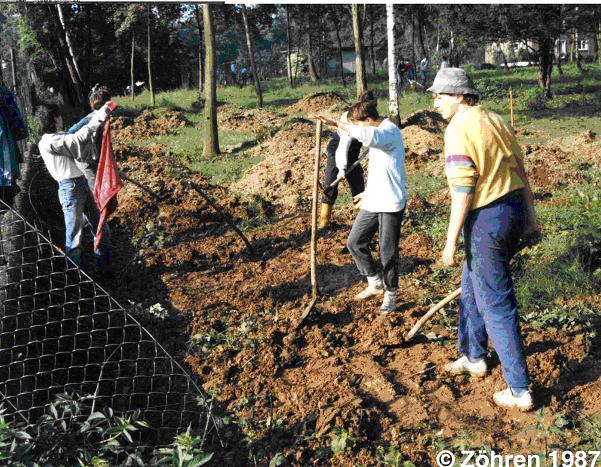 Kl.8b of the GHS on the building site of the memorial site in Hostert

Peter Zoehren, one of the teachers, produced a richly illustrated booklet regarding the institute in Hostert, the work of the Franciscans and the Nazi “euthanasia program”, which was published in 1988. In 2005 it was reprinted at the welfare-educational centre in Krefeld, Viersen. It can still be purchased at the City Hall or the High School. 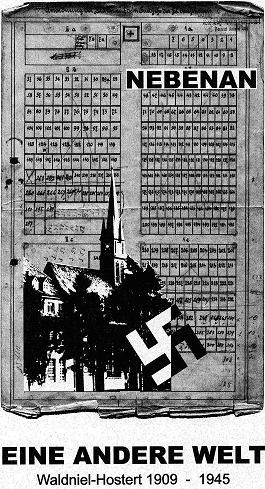 Cover of the brochure, “Next door – another world”