After RAF Wegberg Hospital had been returned to the Federal Republic of Germany in 2010, the main area of JHQ was officially handed over to the Federal Republic of Germany on December 13, 2013 after it had been completely vacated. Following the closure of JHQ many talks took place between many parties with many different ideas being put forward and it was decided that JHQ should be included in infrastructure improvement plans for “Rheindahlen-Mitte”. This resulted in the creation of the “IHEK” planning document described here. It was also initially suggested that two or three “areas of intensive use” should be provided on the site, suitable for commercial enterprises or research institutions that deal with the topic of renewable energies.

However, during the discussions it was stated clearly that the need for commercial building space within the urban area of Mönchengladbach was adequately covered. For this reason, the provision of a “commercial and industrial area in the regional plan” for the area of ​​JHQ was excluded by the Regional planners. The following uses of the former JHQ and RAF Wegberg Hospital areas were agreed on  December 11, 2019 by the City Council of the “Stadt Mönchengladbach”. Click on the map below for details of the various locations (opens in a new window). 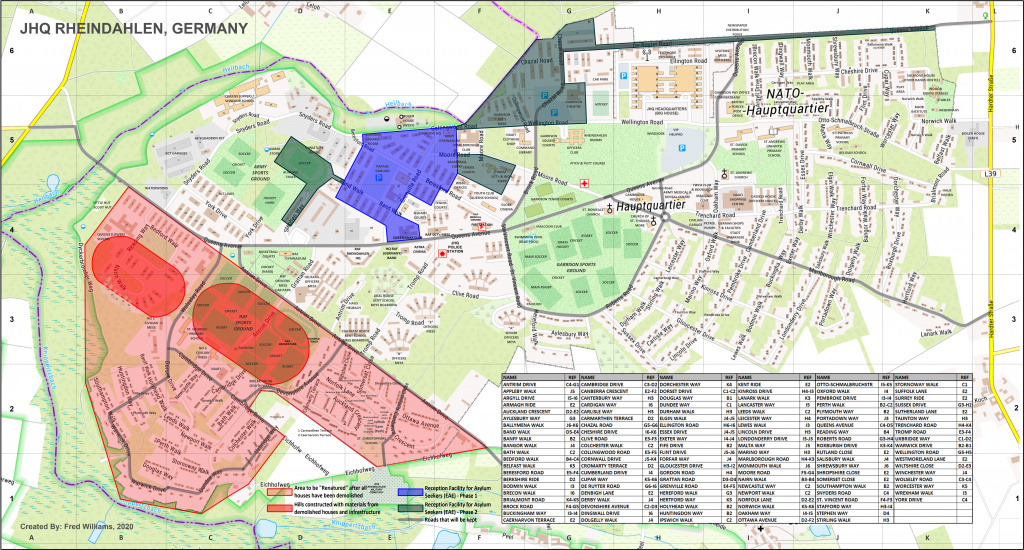 Initial Reception Facility for Asylum Seekers (EAE Facility) In the middle of 2013, the site of the former JHQ was included for the first time as a potential location for an EAE Facility by the “Bezirksregierung Arnsberg” and the “Landes North Rhine-Westphalia”. Whilst around 200 places, in the form of emergency accommodation were already used in the facility during the first half of 2016, the EAE Facility was officially opened on August 17, 2016 with an initial capacity of 250 asylum seekers. Since the summer of 2018 there are 1,500 places available, expanding, in the long term, to 2,000 places.

Use of parts of the eastern area of JHQ for Police Training Facility Part of the eastern area of JHQ has been allocated to the setting up of a Police Training Facility which will offer the “North Rhein Westfalia” police, in particular their Special Units, unique training opportunities to practice tactical procedures and actions for special situations under the most realistic conditions possible. The existing buildings and infrastructure will provide ideal conditions for future-oriented advanced training for the “Polizei NRW“. A lease is planned for a period of at least 10 years. The area covered has not yet been published.

Demolition and “renaturation” of the western area of JHQ. The western area of JHQ will remain in the possession of the Federal Republic of Germany and is to be set aside for the purpose of “renaturing” as part of the Federal Transport Infrastructure Plan and will be maintained by the Federal “Forest Organisation”. To be able to use the areas for “renaturing” the existing buildings must be cleared and first area to be demolished has been determined (see map above).  The “Stadt Mönchengladbach” is very interested in making the area accessible to the public for recreational purposes after the existing buildings have been demolished. To this end, part of the existing road and path network is to be retained. The large amount of recycling material that will be accumulated during the planned demolition and dismantling work should, depending on the volume, either be installed on site or removed from the area. To increase the attractiveness of the resulting natural area, to achieve a higher recreational value and to reflect the formative use of the last five decades for the city, the resulting demolition material should be used to build landscape structures (hills) with viewpoints. Furthermore, routes from the time of military use are to be preserved. (I also recollect reading somewhere that all street signs will remain in place and a “Memorial Route” will be set up with information boards describing life on JHQ) The landscaping is intended to give the citizens of the city the opportunity to experience the adjoining FFH and Nature Reserves and, in addition, to establish views over the city area in all directions, especially towards the city centre.

Remaining areas of JHQ In the long term, over the next 15 years, it has been indicated that the other areas of the JHQ are also to be “renatured” .